[The opinions expressed in these essays do not necessarily reflect the position of ARAUNY.]

In my ethics class, one question that students always raise has to do with the moral agency of animals. Do animals think morally? Do they commit conscious acts of wrongdoing such as stealing, cheating and even murder? Or are these purely human concepts that do not apply to animal behavior? When a lion attacks a zebra, shouldn’t we say that it is simply killing and eating it? When a squirrel hides food from other squirrels, shouldn’t we say that it’s not greedy but skillful? And when a dog has sex with several partners, it’s not really being unfaithful but successful, right?

For this reason I have a serious problem with the hunters in Mumbai who recently made headlines [follow link for images] after they captured a wild monkey and tied it up in the middle of the city courtyard. Their reason: the monkey was causing a nuisance for over six months, including stealing food and tearing up pillows that were on sale in one of the colony’s shops.

Apparently local residents gathered round and cheered as bandages were tied around the macaque’s wrists and elbows and a rope was put around its neck. At one point a passerby patted it on the forehead, “only for the monkey to hiss aggressively before showing him a full set of sharp teeth. Later the shackles were removed from the monkey and it was placed in the cage, where it ate grapes and looked forlornly at the crowd of staring onlookers.” Thankfully, according to one news source in India, the animal was ultimately released back into the countryside.

Speaking as a student of world religions including Jainism and Hinduism, I find it disheartening that a culture which claims to adore monkeys so passionately, would be this cruel and inhumane to one of their most sacred creatures.

Speaking as an ethicist, I am deeply concerned about treating animals like criminals. They do not have a concept of stealing. As intelligent as they may appear from our perspective, they are not committing a crime or acting sinfully when they take food to eat. They are just taking food to eat the best way they know how.

Furthermore, to say that these monkeys do not know any better is just another way of personifying them. They don’t know in the same way that we know. They are not moral agents in the sense of being creatures who are conscious of right and wrong as concepts. To tie up a monkey and publicly humiliate it in a courtyard is not only a ridiculous act of callousness, it is also an unfortunate display of anthropomorphism i.e., attributing human characteristics to animals. No matter how much we want to see ourselves reflected in these primates, the truth is they are not like us. They don’t think in terms of symbolic language; and they don’t share our assumptions about time, space, personal identity/ possessions.  Moreover, monkeys do not make assumptions about the meaning of their actions. They are living minute to minute in a universe of physical experience that is very alien to the world we inhabit.

That being said, it is obviously a precarious situation. The monkeys may not be moral beings, but they are clever little fellows. There is no question that they pester the hell out of Mumbai city dwellers. Don’t people deserve to eat just like the monkeys? Why should children go hungry while the animals are well fed?

I also do not wish to portray the citizens of Mumbai as being particularly unjust to non-human lifeforms. That is far from the case. Yet there must be a better way to solve this problem nonviolently. I refuse to accept that the only options left to humans with a supposedly higher intellect is to kill them off or confine them in bandages. There must be a way for all beings to have their fundamental needs met without resorting to tactics which do harm to the monkeys and spiritually damage humans. I do not know what the answer is to this problem but it can’t be what we see in this photograph. 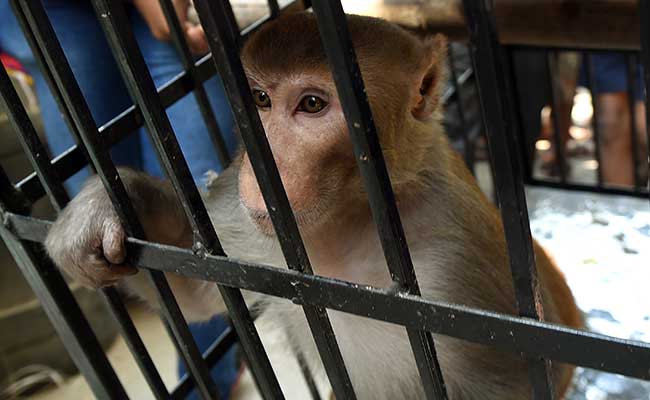 George Payne is founder-director of Gandhi Earth Keepers International based out of Rochester, NY. He has written blogs, essays, letters, and op-eds for a variety of local and national publications including the Rochester City Newspaper, the Democrat and Chronicle, the Minority Reporter, the Atlantic, the Fellowship of Reconciliation, Campaign Nonviolence, Veterans for Peace, and many more. He can be contacted directly at George@gandhiearthkeepers.org.